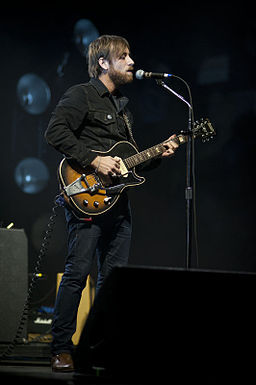 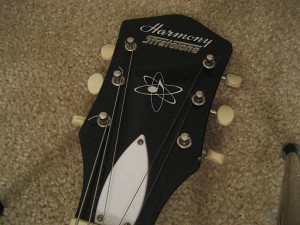 The Harmony Stratotone H47 (Mercury) has one single pickup, which Dan replaced with a Lindy Fralin P-90. The pickup leads to a three way tone switch with “Bass”, “Treble”, and “Rhythm”. The Bass setting acts like you would expect, and is wired through the volume and tone knobs. When the Treble setting is selected, the tone knob is bypassed so only the volume knob works. The Rhythm setting works the same as Treble, except that it cuts even more lows, making it more like a “super treble”. It came with a movable bridge, which can be a major pain to work with, and so they are usually replaced. 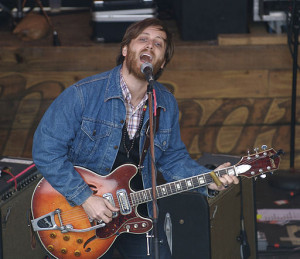 The Harmony H78 is a hollow body guitar made in about 1964. This guitar has three pickups, all of which are DeArmond Gold Foil single coils. Each pickup can be turned on or off in combination with each other pickup, and they each have their own tone and volume controls, although Dan Auerbach only uses the bridge pickup. This model is also fitted with a Bigsby tremolo.

The Guild Thunderbird became Dan’s favorite guitar during the El Camino tour. It’s wired with two humbuckers, each with their own tone and volume controls, a tremolo arm, and a rather goofy, asymmetric headstock that seems to have no rhyme or reason to its shape. This guitar is a workhorse however, and is surprisingly well balanced. He uses this guitar extensively.

Dan uses three amps at all times, and they are always on. All his amps are dirty, but the gain is set at just hitting the threshold of distortion, so he can get a semi-clean tone when playing softly.

This is a fantastic amp! It is hand wired point-to-point, completely tube, and cleans up as nicely as the Fender Tweeds of the 50s. It is, however, hard to find one of these under $2000. Dan doesn’t use any effects on this amp.

, except that the Fender Quad uses a 4×12 cabinet, as opposed to the Twin’s 2×12 cabinet. The Fender twin is known as the Evil Twins because of the incredible loudness, and the Quad only increases the volume! The Twin and Quad use the same circuitry, so if you’re satisfied with the loudness of the Twin (you should be), there should be no reason to go with the Quad. 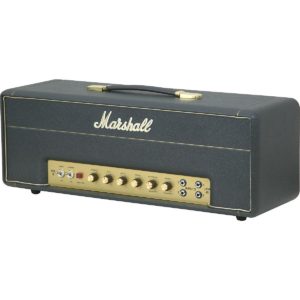 Dan uses this amp along with a tape delay for a little slapback. He runs this through an 8×10 cabinet. All three of these amps together produce his signature on-stage sound, and indeed each one is essential to his sound.

Dan has claimed to have owned over one hundred pedals, and he is constantly swapping out and trying new pedals. Although, there is a group of pedals that tends to remain consistent to his rig.

Although Dan uses the green Sovtek version, this model will get you close enough for sure. This pedal is the backbone of his tone. Make sure to use the Big Muff to boost an already overdriven signal to have the best effect.

This Shin-Ei pedal is actually a Fuzz Wah, but Dan doesn’t use the Wah feature. The fuzz on this pedal is particularly harsh, so a ten-band equalizer is used to cut extra lows produced by this pedal, and to boost the mids.

This is a simple but powerful tremolo pedal that does exactly what it needs to do and nothing more. With Rate, depth, and wave settings, you can dial in just the right amount of Tremolo you need without any extra frills. 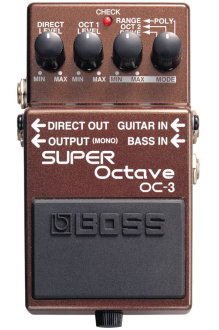 Again, another simple pedal that does just what it needs to do. This is a great pedal for quickly diving down an octave. This pedal can easily be overused, and can turn your tone to shit if you’re not careful. Moderation is key.

Dan runs the Fulltone Tape Echo through the Marshall JTM45, to give a subtle slapback effect. Now, this seems a bit overkill in my opinion, but that’s what he uses, so that’s why I’ve included it.

The MXR 10-Band EQ is an inexpensive, yet powerful equalizer. Dan uses this pedal directly after the Shin-Ei Companion Fuzz to counteract the harshness of the pedal. He uses it to cut the extra lows produced by the Companion Fuzz, and to replace mids sucked by it as well.

This is a pedal based off of the Russian Sovtek Big Muff. It has a smoother, more natural sustain and a typical Big Muff.

This is an overdrive pedal based on the ToneBender pedals from the 60s. It’s more of an all-purpose pedal, unlike the very specific use pedals such as the Big Muff and Hoof.

If you want to sound like Dan Auerbach, and don’t have the thousands of dollars worth of amps, or hundreds of guitar pedals, there is still hope.

You can get this amplifier and cabinet combo brand new for a reasonable price, and I believe you can get very close to a Dan Auerbach tone with this one.

We featured this pedal in our 4 Best Budget Overdrive/Distortion Pedals article, and for good reason. This is an amazing pedal, with an even more amazing price.

This is a pedal I can’t recommend enough. If you ever play with distortion, you should have this pedal in your kit. The best way to use this pedal is place it after an already overdriven signal, such as a boost pedal or another distortion pedal. You can read our post on the Big Muff Pi here.

This is a simple, inexpensive, but powerful tremolo pedal, and it is the same one that Dan Auerbach uses. It also happens to be very sturdy, so you can trust that it will hold up even after several gigs.

Dan Auerbach uses a combination of flat-picking and fingerpicking. You’ll have to develop your on style on this, because he doesn’t play as consistently as others. Thickfreakness is a relatively simple, but powerful song, and is an excellent first song to learn.

One last thing to mention, if you’re going to record in a style like Dan Auerbach, try to keep it a bit “sloppy”. Dan has said that he purposely allows his guitar to bleed through the drum microphones in the studio to keep a loose, laid-back feel.