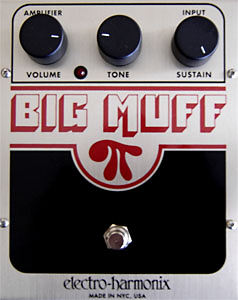 Who uses a Big Muff

The Electro-Harmonix Big Muff is one of the most popular pedals, and has been used by an incredible group of musicians. Just a few of these artists include:

What Songs have a Big Muff

A Big Muff has a characteristic sound that once you’ve heard, you can pick it up anywhere. Some famous examples of its usage include:

was created in 1969 to replace the original Big Muff, and was designed to have more sustain. It was a near instant hit, with Carlos Santana and Jimi Hendrix being among the first to use it. Its sound can range from a buttery smooth violin-like tone, as David Gilmour tends to use, or it can be a impenetrable wall of fuzz when utilized by the likes of Jack White or Dan Auerbach.

How the Big Muff Works

This pedal is powered by four transistor stages. First, the signal is given a clean boost. No distortion or clipping occurs at this stage, this is only to drive the next stages of gain. The is to be sure the signal is heavy enough to be given the proper fuzz treatment. Next, there are two clipping stages where the actual distortion is produced. These stages produce the necessary clipping and distorting. The fourth stage is a tone recovery stage. Since the device is passive, some volume is lost in the tone stack, and is recovered at this last stage.

The tone knob is a passive “seesaw” control. Turning the knob counter-clockwise will cut highs and boost lows, leaving the knob in the center will cut mids, and turning it clockwise willl cut lows and boost highs. No matter where the knob is, there will be some frequencies that are cut out. This is not a negative trait, in fact, this is necessary to create the distinctive tone of the Big Muff.

How You Should Use the Big Muff

As well as this pedal can perform, it can be quite finicky and temperamental. It needs a bit of coaxing to get a desirable sound out of it. It also needs a lot of volume to perform at its peak, since it’s a passive device. Having a loud amp works fine, but if you’re using a practice amp or playing through a low-output device, it helps to have a booster in front of it in the chain. You will have to be comfortable with dialing in the volume on your guitar as well, to drive the pedal or roll off some of the edge. Using a compressor is not recommended. The Big Muff provides plenty of sustain on its own, and introducing a compressor to the chain will bring about noise, feedback, and generally a muddy sound.

Where to Place Electro-Harmonix Big Muff in the Chain

The Big Muff should be placed after any other distortion pedals and equalizers, but before modulators, or delays. Placing the Big Muff before another source of distortion will over-saturate your sound in most cases, but since the pedal loves volume, placing other drivers or distortion pedals before it can be used to great effect.

Differences Between American and Russian Model

The American version is commonly said to be more of a specialty fuzz sound. It has a brighter sound with more sustain, however the Sovtek version has a much darker sound and is suited for more uses. It also has less of a mid scoop, so it cuts through the mix a bit better. Dan Auerbach prefers the Sovtek version, and the song Till I Get My Way is a great example of the Sovtek tone.

One thought on “Electro-Harmonix Big Muff”