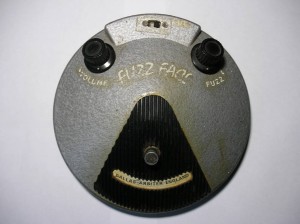 Who uses a Fuzz Face?

What Songs Have a Fuzz Face

George Harrison – Most of Abbey Road and Let It Be

History of the Fuzz Face

The Fuzz Face is a fuzz pedal used primarily for electric guitars, and sometimes bass. It was introduced in 1966 by Arbiter Electronics, which later became Dallas Arbiter. In 1993, Dunlop Manufacturing took over production, and this is where the Fuzz Face is made today.

By the mid 1960s, fuzz pedals had not really gone mainstream yet. There were a few on the market already, such as the Maestro Fuzztone.  Before fuzz pedals, guitarists had to maim their equipment to achieve the fuzzy sound. Some artists would slice their speakers with a razor blade, or dislodge or crack vacuum tubes. While the Fuzz Face was a revolution in pedal technology, the first were made very cheaply and were notoriously inconsistent.

In the 1950s and 60s, germanium was the material of choice for transistors, and the manufacturing process for these was far from precise. The first models of the Fuzz Face got their fuzz from germanium transistors. Because of the imprecise manufacturing techniques, the first fuzz faces were incredibly inconsistent. One could buy a dozen seemingly identical pedals, and find that each one was completely different. Some were downright awful.

Besides the poor manufacturing, germanium transistors are inherently inconsistent by themselves. They change according to temperature and humidity. Jimi Hendrix was known to have bought several at a time, mark the ones that were acceptable, and later discover that their tone had changed radically based on the location and weather.

When they went from germanium to silicon transistors, this removed the inconsistency, but brought about other problems. Germanium fuzz is much softer and rounder than silicon fuzz, and is the defining sound of 60s fuzz. Silicon transistors are much harsher, and is sometimes harder to dial in. Silicon also picked up AM radio frequencies, and would occasionally transmit radio broadcasts through the amplifier. Ultimately it’s a matter of preference. Some people prefer the harsh sound of silicon, and others prefer the warm fuzz of germanium.

The electronics are housed in a circular case, and two knobs are featured: Volume and Fuzz. There is no gain knob, the only way to change the level is with the volume knob. The arrangement of the controls and logo suggest a face smiling back at you, hence Fuzz “Face”.

The fuzz face has gone through several iterations throughout its lifetime, but there are definite constants. The first Fuzz Face pedals using the germanium transistors have a warm, typical 60s sound, and is the sound that Jimi Hendrix is best known for. The later silicon models were more harsh, and is more like the tone Eric Johnson achieves on Cliffs of Dover.

One of the more enticing benefits of the Fuzz Face is its transparency. It retains much of the original tone of the guitar, and doesn’t simply “overwrite” the sound of your guitar. If you’re using a telecaster with the trademark “quack”, that sound will remain, but it will be a fuzzy quack. The Fuzz Face however doesn’t provide huge amounts of gain, so if you’re looking for all-out walls of distortion, you may have to supplement other pedals in your effects chain.

Where to Put in Guitar Effects Chain

The fuzz face pedal is definitely on the list of best distortion pedals, and I would without a doubt place it on the list of essential guitar pedals. You can purchase a Dunlop JDF2 Fuzz Face®

on Amazon. This is a must have guitar pedal if you are looking for the late 60s fuzz sound.