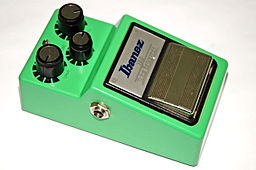 The first overdrive pedal I would ever recommend.

The Ibanez Tube Screamer is an overdrive pedal which was created to push tube amps harder. It frequently ranks number one in several number-one-best-pedal lists, and is considered by several as *the* overdrive pedal to use. Its design gives it a mid-frequency boost or “hump”, which is useful for lead guitarists when trying to cut through the band and stand out, and makes it a popular choice for blues.

It starts with a subtle clipping circuit, which is then mixed back with the original signal, giving a driven tone without any loss of character. After the clipping stage, it moves through a high-pass filter. The clipping is done with an op-amp, and a high-pass filter afterwards. This combination of low-pass and high-pass is what creates the characteristic mid-hump in the frequency response.

Who Uses a Tube Screamer

In this video, GuitarGirlTS9 is using two Ibanez Tube Screamer TS9’s, modified with a Keeley Mod. Try to notice the characteristic mid-hump in the frequencies.

Where to Place Ibanez Tube Screamer in the Chain

I would recommending putting the Tube Screamer as the last pedal to enter the amp minus modulators, delays, etc. which should really be in the effects loop anyway. The Tube Screamer was designed to push tube amps that lacked gain, go putting it directly before will really make those tubes cook. Remember that you don’t need a tube amp to use it. It can be used as a convincing tube emulator.

As far as I’m concerned, the Tube Screamer is an essential piece of equipment to help lock in your perfect guitar tone. Your pedalboard will not be complete without it.