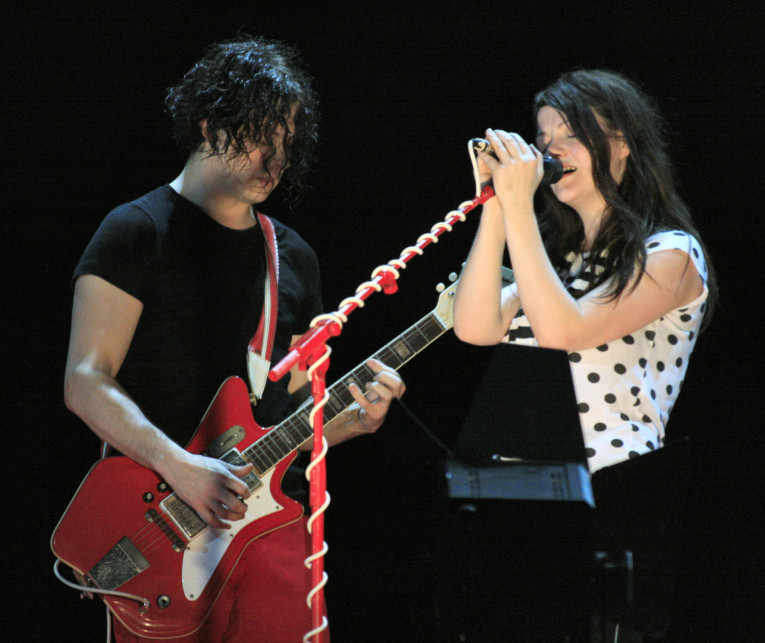 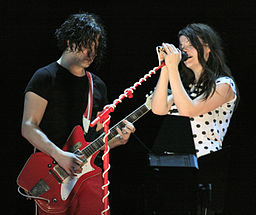 For this article, I will be focusing on the White Stripes era of Jack White’s career, because I feel it is the most distinctive and most defining. Rarely does an artist take something like simplicity and minimalism, and make it seem like an all-out struggle and fight. He looks and sounds like he’s constantly battling his guitar, and at times, it’s hard to say which will win.

Jack White’s main guitar is a 1964 Valco Airline (JB Hutto Model), which can be seen in the picture above. What used to be considered a budget guitar and what at one time could be found for cheap at many pawn shops, is now a highly sought after piece of equipment thanks to Jack White. The Airline is not a guitar anyone would consider professional. It’s made of fiberglass (the manufacturer calls it Res-O-Glas), has terrible sustain, is hollow, and is nearly impossible to keep in tune. Jack’s front pickup is broken, and the only work he’s put into it is a set of new tuners. “Playing that guitar makes me feel like I have to take something that’s broken and make it work.” It does have a decent bite, however.

Jack has said that for seven years in the White Stripes he only used a Digitech Whammy and an Electro-Harmonix Big Muff. While this isn’t exactly true (he used other pedals in addition to these), he always had these on his pedalboard. Using these two pedals is essential in emulating Jack

Early in his career, Jack used the Whammy pedal to break apart front the rest of the band for a few moments by jumping up an octave and playing a riff. Now he just prefers that all his solos be high and piercing. Nearly every time Jack takes a solo, he uses his Whammy to jump up an octave. It’s a striking effect, and one that takes boldness. A careful balance must be made, because I’m convinced listening to a sound like that for too long may make a person go insane.

The Big Muff is Jack’s only pre-amplifier source of distortion. Listen to Dead Leaves & the Dirty Ground. The Big Muff is a heavyweight in the pedal world, with Santana and Jimi Hendrix being among the first to own it. Its sound is unmistakable, and Jack pushes it as far as it will go. He keeps the volume maxed, and the tone cranked all the way in the treble direction. He puts the Big Muff directly after the Whammy, and right before the amps.

Jack plays simultaneously through a Fender Twin Reverb and two Silvertone 6×10’s. The Silvertone has terrible reverb, but a great, thick crunch. The Fender Twin is a remarkably clean amp, with outstanding reverb. The reverb is always on. Both of them together make an amazing combination.

Struggle – To play like Jack White, you have to struggle. You have to be comfortable with minimalism, and wrestle your guitar. Jack White has said that every note and every song has to be a fight. You have to fight against the song itself, and make yourself break through. Have a love-hate relationship with your guitar. Jack recommends starting with only something you can afford, the beginning has to be especially difficult.

Use a heavy pick – Use anything that will strike the strings harder. The heavier the pick, the better. Jack uses mostly upstrokes, because for him, that what makes the biggest, hardest sound.

Be a minimalist – Jack broke his left index finger in a 2004 car accident, and has lost much use of it. As a result, barre chords are much harder to play, so he took even more of a minimalist approach and only played the essential notes of the chords. He also has an unusual method of playing power chords, which is to use his little finger to play the non-root strings. Anytime you can get away with playing an open string, an open chord, or lower on the fretboard, do it. If there’s no reason to play redundant notes in a chord, then don’t do it.

Improvise – Jack will never play a solo the same way twice. He is a blues man, and he relies on feel and emotion more than technique and accuracy. You have to learn to play what you feel, not what is “correct.” Play the “wrong” notes sometimes, see how they sound. There may be no way to genuinely express yourself if you’re too worried about theory and technical correctness. Especially on the earlier albums, Jack’s guitar would slip out of tone mid song, and by the end, some strings were nearly a half-step lower. Try tabbing that out, and you’ll find it’s much easier to just wing it.

How to Play Seven Nation Army Like Jack White

Remember that Jack’s playing philosophy is minimalism, and to always treat the song like a struggle. Fight your guitar, and don’t ever let yourself get comfortable. Seven Nation Army is a relatively simple song, but you’ll never see Jack playing it like it is.

The bass line you hear is not actually a bass at all, Jack is playing his guitar through an Electro Harmonix Multiplexer. If you don’t have access to this pedal, or a suitable alternative, there are workarounds. Many people tweak their EQ and crank the bass, while completely cutting mids and treble. It won’t sound exactly the same, but many prefer this rumbling tonality.

Jack uses an Electro-Harmonix Big Muff as practically his only source of distortion. You can find alternatives, but honestly, this is an incredible pedal and the price is extremely reasonable. Jack uses a Digitech Whammy to get the squealy super-highs in the song. These pedals are pricey, but if you truly want the sound, this is what you need.

Seven Nation Army uses a lot of gain, so turn that to at least 8 or 9. Keep the mids at around 4 or 5, and crank both the treble and bass to 8 or 9. If you’ve got presence on your amp, you’ll want to tune that in to your specific preference, but typically it will be left fairly high as well.

To truly get Jack White’s sound down, you need to get a slide. Absolutely buy a slide. It’s an almost negligible amount of money when you factor in the huge world that will open up tonally. Personally, no piece of guitar equipment has inspired me more than my trusty glass slide.

When learning how to play Seven Nation Army, don’t let its simplicity make you too comfortable. Find ways to challenge yourself, and improvise!

In the end, to play like Jack White, you need to have a fleeting plan, then throw it away. Attack the song. Play your guitar, don’t let it play you. Improvise everything, and make people think you want to kill your guitar. Jack proves that you don’t need an expensive guitar to have great tone and skill, and has even said that’s the reason why he choose the Airline. He felt like he had something to prove, and that you can express yourself with any piece of equipment.