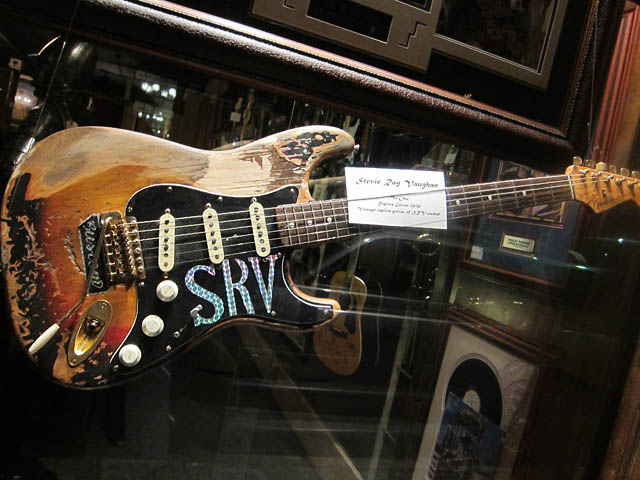 Stevie Ray Vaughan’s tone is highly sought after, yet it’s rarely successfully emulated. Despite the fact the he was constantly changing up his gear, even with his exact gear setup, you’ve perhaps only won half the battle. Very few people have the left hand strength and the monstrous pick attack to imitate him, which is the essence of Stevie’s sound. Still, his tone is one that is extremely desirable, and I will do my best to help you achieve that sound.

Stevie Ray Vaughan was always experimenting with his equipment, and his early sound is in fact quite different from his later sound. Since his early sound is the one which is most recognizable, I will focus on that for the rest of this piece. Besides, once you get the gist of his early stuff down, it’s much easier to transfer that over to his later tone.

The one factor that remained relatively unchanged in his career was his guitars. He always used a Fender, usually a Stratocaster with single coil pickups. He used giant strings, and because of this, he would have to replace his frets to accommodate the increased string gauge. The choice of guitar is not extremely important, as long as you are using single coil pickups. You *might* be able to cheat by with humbuckers, but I really wouldn’t recommend it.

Stevie tried not to rely on many effects to get his sound, most of his tone was in his fingers and his amp. There were a few pedals that he rarely went without however, and a few that made distinctive appearances on some of his more popular songs.

Stevie Ray Vaughan used a Tube Screamer through most of his career, and that became a staple of his sound. As the Tube Screamer is an overdrive pedal, he didn’t use it for distortion, but rather to increase the volume and push his amps. He used very little of the distortion effect of the pedal, but maxed the level and tone. He occasionally would chain two of these together. Without a Tube Screamer or two, or a viable substitute, you simply will not get close to his sound.

Because the Tube Screamer is used mainly to push more juice into the amp, turn it on full force to saturate the amp, and get everything you can out of your amp.

A fuzz face is going to color your tone a lot. Fuzz Faces aren’t known for their subtlety.

He didn’t use this compressor, but this is one that I recommend. Stevie used a lot of string bending, hammer-ons, string pulls, and plucks often, so a compressor is absolutely essential. You’ll have to play around with the settings to find the sweet spot, as it will probably vary from song to song. Mainly, you’re using the compressor to tighten up your dynamics.

Be mindful of the amount of compression you’re using. Using a compressor will increase the amount of noise in your chain, so you’ll need to constantly experiment with the settings.

Stevie Ray Vaughan started out using a Vox Wha and later used a Dunlop Crybaby. He would sometimes duct tape two of these together so he could control both at once, or sit on a stool and rock both in opposite directions, which you can hear on “Say What!”

As with other pieces of Stevie Ray Vaughan’s gear, his amps cycled in and out. However, a pair of Fender Vibroverbs always appeared on stage with him, no matter what. He occasionally used a pair of Fender Super Reverbs as well. Fender Super Reverbs are loud as hell, and can stay clean even at unbearable levels, so Stevie used these for extra volume in addition to his other amps.

One strange amp he used rarely was the Fender Vibratone. The Vibratone had a speaker inside which was enclosed by a rotating piece of Styrofoam. The Styrofoam container was slotted, and this created a spinning Leslie Speaker effect. This unmistakable sound is most famously heard on “Cold Shot”.

Remember that technique is the absolute most important factor in his tone, and playing like him is going to hurt!

Ideally you will want to use a Fender Strat, but failing that, you can use a Stratocaster style guitar as long as it uses single coil pickups. Stevie Ray Vaughan used giant strings, so you’ll have to do a bit of work. If your fingers aren’t bleeding and blistering, you probably aren’t usually big enough strings. Also, because of the increased string gauge, you’ll have to use bigger frets to accommodate the string size, and tune your strings down a half step.

You’ll want to keep the volume on your guitar turned to full, and back off to 8 or 9 when you want to ease up on the distortion. You need to have a strong signal coming from your guitar at all times.

Now, some people, including BB King and Billy Gibbons, say that using thick strings is unnecessary. Why would you work so hard? Understand your limits. If you can’t play with strings that thick, or if you don’t want to modify your guitar to accommodate them, then don’t. Find what works for you.

Your amp has to be loud. You’ll need to have speakers that are at least 12 inches in diameter, or at the very least, two 10 inch speakers. Stevie frequently chained several amps together, he was always loud. If your amp has both Master and Preamp controls, you’ll need to keep the preamp to at least 5 or 6, and play with the master knob to adjust your sound accordingly.

For his earlier sound, a good starting point for your amplifier will be to keep your treble near max, your mids at about 5 or 6, and the bass at 6 or 7. In this way, you can roll off the extra treble with the tone pot on your guitar. Use the volume pot in your guitar to adjust your distortion.

Even with the extra huge strings on his guitar, he still broke three strings during the recording of the song “Texas Flood”. That’s because he played hard! He was known to put super glue on his finger tips to keep them from falling apart. He had extraordinary pick attack, and if you’re emulating him, you need it too. You have to pick strong and hard, and you will probably break strings if you’re doing it right. Just remember, if you think you can pick harder, you’re not picking hard enough.

Stevie Ray Vaughan frequently used the minor pentatonic scale and lived in the blues scale. These scales are your best friends, and are probably all you need, and follow the 12 bar blues format of I IV V progression.

Stevie Ray Vaughan is probably one of the hardest guitarists to emulate. Many have been trying all their life, and still can’t get there. If you’re thinking of beginning this journey yourself you’ll need a combination of superhuman strength, a superior knack for the blues, and lots of super glue. Good luck!